71% of the planet’s surface is covered by water through oceans, rivers, lakes, and ice (United States Geological Survey). Humans are also made of water, as about two-thirds of our body weight is water. Our blood’s composition is very similar to that of the ocean, so it can be said that we humans are comparable to walking sacks of seawater! Additionally, due to water, the Earth is the only place in the observable universe that is adequate enough to host and support life. To say that water is important would be a massive understatement, equivalent to the size of Earth in comparison to the cosmos (aka. tiny!). 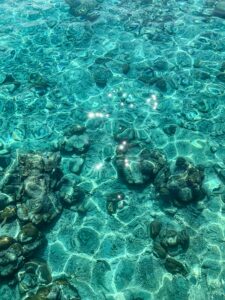 Going back to the beginning of life on Earth (and possibly in the cosmos), water was the channel that served as the birth of the very first life forms. Prokaryotes, or cells without a nucleus, and the first forms of life, were born in the depth and darkness of the seas. The properties of water, along with the presence of organic compounds, allowed them not only to exist but eventually, once in contact with the sun, to “…evolve [ ] using the Sun’s energy, along with compounds such as sulfides, to generate their energy.” (Australian Academy of Science)

Today, the miracle of life provided by water shines in many other ways. Water plays a central role in the circulation of nutrients on Earth. The water cycle is involved in changing the weather and climate and consequently shaping the land. Water is an important medium for biochemical reactions in the cells or our flora as it makes photosynthesis possible and thus the production of oxygen, also known as the element that allows us to stay alive and keep our lungs from collapsing. In our own anatomy, if the amount of water in the body decreases even by just 2%, your body signals thirst, and your concentration decreases dramatically. Losing as little as 5% of water causes fatigue and headaches. When a loss of 10-15% occurs, the muscles convulse, and you enter a state of delirium. Dehydration beyond this will result in death.

The unique properties of water (hydrogen bonds) make it ideal for life and make the very essence of life depend on it. Because water can absorb more heat per gram (g) than any other substance, it acts as a heat reservoir. Thus, oceans and lakes regulate extreme temperature fluctuations. The massive strength of hydrogen bonds causes its high specific heat capacity and its high heat of evaporation. In fact, humans can last up to three days before stores of water are completely depleted as the bonds are not easily broken nor water vaporized. Furthermore, given that water is the ‘universal solvent, it can break down several compounds that need to be separated to extract the energy within the bonds for cellular use.

All in all, we have looked over the role of water in not only allowing emergence of life but sustaining it not only among human beings but in the environment as well. In summary, water’s unique chemical properties allow it to make life possible. These include strong cohesion, high evaporation temperature, resistant hydrogen bonding and the ability to dissolve most compounds. These properties are what make life-sustaining processes such as oxygen production, photosynthesis, metabolism and homeostasis possible. Earth is covered and made up of water; therefore, it is imperative that we watch over it as the nonrenewable resource that it is as it is the fine line that separates us from the populated and the desolate ocean of emptiness outside the milky way.