About 20% of our daily fluid intake comes from the food we eat. Fruits, vegetables and livestock are key staples for a healthy human diet so saying that water is a critical input for agricultural production might sound obvious but very few people likely connect the dots or are curious enough to inquire about the water their food eats. Let’s fix that! 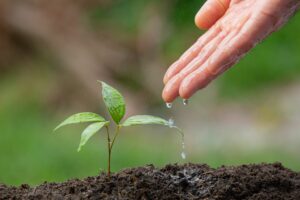 Water is essential for sustaining life and it is a critical resource in global food production including both crops and livestock. Accordingly, having clean water to irrigate crops and also sustain livestock is and will become increasingly important for food production as the world population is predicted to increase to approximately 10 billion people by the year 2050.

Statistics indicate that global agricultural water consumption exceeds 2700 billion m³, accounting for approximately 70 % of global freshwater withdrawal (He et al., 2021, Shabbir et al., 2014). In accordance with the projected population increase, global agricultural water consumption is projected to reach 3200 billion m³ (He et al., 2021) to meet the needs of agriculture (livestock and crops) and sustain these new demographics. The agricultural industry will need to produce 70% more food which will require more water and they are already constrained with having to meet key performance metrics. Thus, the impact of water quality as a critical input for agriculture will only increase in importance with time.

Irrigated agriculture represents 20 percent of the total cultivated land and contributes 40 percent of the total food produced worldwide. Water for agricultural crop production also plays an important role in food security. Poor water quality can affect the quality of food crops and lead to illness in those who consume them. More specifically, irrigating crops with contaminated water can lead to contaminated food products which can then lead to illness upon consumption. Post-harvest disinfection methods are employed to reduce these risks and reduce the occurrence of pests but also present an increased risk of remnants or residues of harsh chemicals on foods and environmental pollution.
Excessive and careless application of pesticides at various stages of production contributes not only to the occurrence of resistant pest races, but also to environmental pollution and residue on raw materials. The pressures to increase yield, mitigate pest destruction and ensure low risks for foodborne illness also can have a negative impact on water quality. More specifically, threats to water quality include not only the risks for bacterial/microbial contamination but also contaminants from high pesticide and fertilizer use. This may include glyphosate and or excess nitrate and phosphates from fertilizers not taken up as nutrients which end up polluting the groundwater. Thus, in addition to the pressure to increase productivity, we are also dealing with having to mitigate threats to soil health for the long term.

Groundwater from wells is the main source of agricultural water (aside from surface water and rainwater) and has been considered one of the safest sources of water. However, depending on field location and field size, it may not be possible to use water from these sources for irrigation. Agriculture is the largest user of water globally and thus methods to improve water quality require innovative, science-driven solutions, while maintaining acceptable quality standards.

Global production of animal foods has more than tripled over the last 50 years, accompanied by a threefold increase of crops used for animal feed (Food and Agriculture Organization of the United Nations [FAO], 2018). One third of all cropland is now being used to produce crops for feed (Steinfeld et al., 2006), and one quarter of the ice-free land area of the world is occupied by food animal pastures (FAO, 2018). It is critical that livestock are provided with adequate amounts of quality water, free of contamination.
Consumptive water use varies with livestock production types with meat bovines being the single largest water user with 32.7% of total livestock consumptive use, followed by dairy bovines with 18.1% and industrial pigs with 14.3%; smallest quantities are appropriated by layer hens, 4.1%; smallholder dual-purpose poultry, 3.4%; and smallholder pigs, 2.1% (Heike 2020). Contaminated water can contain disease-causing organisms which can rapidly spread if animals are drinking from the same trough. In addition, many chemicals and microorganisms can be dangerous to livestock. These can include nitrates, sulfates, and chemicals found in pesticides like DDT, Chlordane, and Endrin. Certain microorganisms such as blue-green algae, Cryptosporidium, or Staphylococcus, can be toxic to animals and cause symptoms like diarrhea, lack of coordination, labored breathing, or death. Ill animals can then release millions of infectious microbes into the soil that can further contaminate other water sources.
Key metrics of economic success in any sector of the contemporary livestock industry include four fundamental parameters: i.e. growth rate, feed conversion ratio, reproductive success, and product quality. Of note, all of these parameters can be negatively affected by water contaminants. Considering that water is consumed in large quantities by livestock, if water quality is poor, it follows that there is an increased risk that water contaminants could reach a level that may be harmful. Further, enclosed livestock production has a high biosecurity risk and any disease entering these facilities can cost thousands to millions of dollars by just one outbreak. More importantly animals with illness pose a risk to human health and survival.
Similar to the challenges of crop production, these farmers and producers are being pressured to produce more while also having to mitigate risks to human health and environmental pollution. They are faced with high costs for chemical-based water treatments, and they are required to lower the usage of harsh chemicals that can impact the environment. Water is one of the most basic resources needed in agricultural production and it is the highest consumed nutrient in animal agriculture. Moreover, agriculture is the single largest water user accounting for 69% of global freshwater withdrawals (FAO, 2016) and an even higher share of consumptive freshwater use. As the largest user of water globally, agriculture water requires innovative, science-driven solutions to help farmers adapt to changes in the environment, meet demands for production, while minimizing negative impacts to the environment.

FDA Standards for Agricultural Water Use on Farms and Food Safety:

Water used in agricultural operations having been identified as a potential source of pathogens that may contaminate food, the Food and Drug Administration (FDA) has been required to develop and evolve regulations aimed at improving the safety of produce. They also took into consideration conservation practices and environmental standards such as those by USDA’s Natural Resources Conservation Service (NRCS) and the Environmental Protection Agency (EPA).

Generally, the proposed agricultural water standards require farmers to ensure that agricultural water is “safe” and “of adequate sanitary quality for its intended use.”  That means that water should not contain pathogens or contaminants (i.e. EPA standards) and that it should be suitable for use.  FDA is basing its proposed standards on monitoring for hazards and testing water for fecal contamination – specifically for generic E. coli, which FDA claims is a satisfactory indicator for determining fecal contamination. If a farmer has determined or has reason to believe that the agricultural water is not safe or of adequate sanitary quality, he is generally required to immediately discontinue use of that water on the farm.  He must then take action, inspect the on-farm agricultural water system components that are under the farm’s control, identify any conditions that could be causing the problem, make any necessary changes to fix the problem, and retest the water to ensure the changes were effective or simply treat the water.